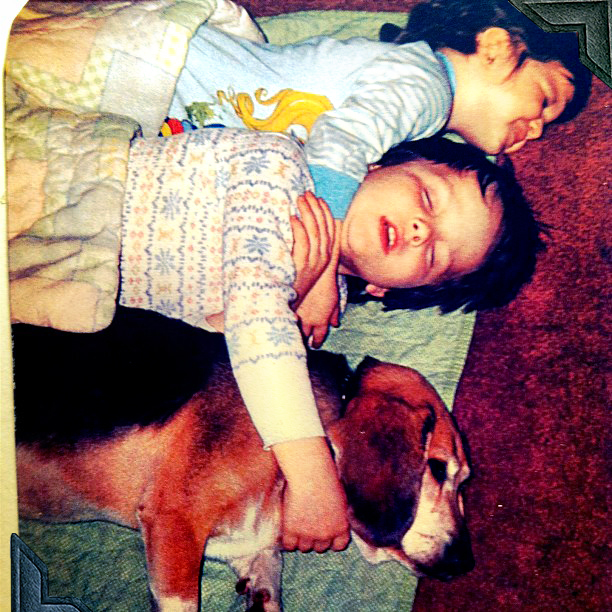 According to my mother, I was a late talker. Not because I lacked the ability—I could holler “MOM” at an ear splitting volume from the age of sixteen months—but because I had an older brother who handled things for me.

Jacob was a year and a half older than I and seemed to enjoy reading my gestures and translating my needs to adults. He ensured that cartoons were viewed, cereal was served, and that all bubbles were stirred out of any remotely bubbly beverage intended for me. In our one-bedroom apartment in southern New Jersey, we didn’t have many toys. But I had a big brother and Jacob had a baby sister. We were ignorant of all the pressed plastic playthings we didn’t have.

My favorite way to show my affection for Jacob was peeling his eyelids open in the morning so I would never spend a moment of my waking life without him. Or I’d squash his face between my palms so his cheeks squeezed into his eyes in a marshmallowy way that made me laugh. This type of manhandling was not, however, supported by our cat, Anna, an ancient grey-tuxedo colored feline with ideas.

We called her our cat, but the only human she deferred to was my brother. When he sat, she curled herself around him. If someone approached him, Anna would race to reach him first, bristling and hissing at the interloper to stand back. After several attempts at hugging my brother left me with scratched forearms, I learned that—at least until I was bigger—Anna was as close to Jacob as I could get. But if I couldn’t love my brother by hugging him and squishing his face, I would find another way.

After my second birthday, I went through a phase of saying my brother’s name as an answer to every question. How was I feeling today? Jacob. What did I want for lunch? Jacob. What was my name? Jacob. One autumn morning, standing on a porch with my mother we saw deer nibbling on a neighbor’s garden. My mother said, “Look Mary, it’s a deer,” to which I responded “no Mommy, that’s a Jacob.”

When I was seven years old and Jacob was nine, our parents divorced. In the aftermath, my brother and I were sent to Oklahoma to live with our mother’s father and step-mother. It was the only way my mother could keep the two of us together, as neither of my parents could afford sole custody of two children.

My grandfather had a steady job with benefits. His wife was a homemaker. In their house in Oklahoma there was always plenty to eat, plenty of toys, and everyone had their own bedroom.

Jacob went back to New Jersey when he was eleven.

My grandfather and his wife adopted me a year later. I was well tended and well fed; I got an education. I was relieved. But underlying this relief was a sadness I could not name. There was no one around to translate to the grown ups what I needed; especially when what I needed was my brother.

In the adoption process, we changed my surname to match my grandparents’ and I had the option to change my whole name. I had considered this option for months. In the end, I decided to keep first name and change my middle name.

Because—just like when I was a toddler—Anna was as close to Jacob as I could get.

I didn’t see Jacob again until I my freshman year of college. While I studied English Literature at a private university in central New York, my brother prepared to enlist in the Army. He drove up to see me over Family Weekend. The socio-economic disparity between us was wide as a sea. His shoulders had broadened but his cheeks were still wide and soft, pressing up into his eyes when he smiled. The last thing he did before he left that day was teach me some self-defense moves, so I would know how to “handle” myself if necessary. As I hugged him goodbye, I instinctively patted his face with my palm.

For the past twenty-two years, since my brother left and I changed my name, I have introduced myself to people as Mary Anna King. No one bats an eyelash; that is my name. But I always know, on a deep, secret level that when I say, “I am Mary Anna King” I am really saying, “I am Jacob.”